]LinkedInSend eThe Choose Home Care Act of 2021 was introduced in the U.S. Senate less than 72 hours ago, but it’s already creating major buzz in the senior care world.

The Choose Home Care Act of 2021 was introduced in the U.S. Senate less than 72 hours ago, but it’s already creating major buzz in the senior care world.

If enacted, the add-on payment would help in-home care providers offer things like meals, transportation and other services targeting activities of daily living (ADLs) and the social determinants of health.

“The home health industry has long felt that care in the home should be the center of health care,” Dombi said. “And this is a step in that direction.”

Not everyone is as bullish on the newly introduced legislation, however.

The American Health Care Association and National Center for Assisted Living (AHCA/NCAL), a group that represents more than 14,000 nursing homes and other long-term care facilities, said it “adamantly” opposes Choose Home because it believes it would “supplant existing benefits.”

So far, AHCA/NCAL is largely alone in its public criticism of Choose Home.

In addition to NAHC, the bill’s supporters include the Partnership for Quality Home Healthcare, National Council on Aging, LeadingAge and AARP, the latter of which is entirely dedicated to “empowering Americans 50 and older to choose how they live as they age.”

“The bill is about patients, not providers,” Dombi said. “What we’re asking people to do is to stand back and not listen to rhetoric from people who are concerned about their business. Instead, look at those voices that have come in on behalf of the beneficiary population. That should be the test that’s applied to evaluate this program.”

Medicare beneficiaries eligible for Choose Home could be able to receive a maximum of 360 hours of extended care services under the benefit. The add-on payment would be structured as a flat rate falling into one of four categories, depending on total number of hours.

If Choose Home participants needed more than 360 hours of extended care services, they could supplement the benefit with family-caregiver support or services paid for by other means, Dombi explained.

“There are people in nursing homes today who bring in supplemental services,” he said. “It’s not like they’re barred from having more. It’s just that the services under the benefit wouldn’t be any greater than the 360 [hours].”

Based on its ability to mirror post-hospital skilled nursing facility (SNF) care in the home, Choose Home would generate as much as $247 million in annual savings to the Medicare system, according to health economics firm Dobson DaVanzo & Associates.

Those savings take into account new costs to the Medicare program for the add-on payments to home health providers, Dombi noted.

“Dobson DaVanzo & Associates considered the spend on the extended health care services when calculating those savings,” he said. “It wasn’t simply the reduction in skilled nursing facility [expenses]. It was a combination of a reduction in SNF spending and the increase in spending in the home setting.”

Despite the positives highlighted in the analysis, some senior care experts have privately expressed concerns about Choose Home’s potential price tag to HHCN.

One source, for example, predicted that many home health providers already taking care of patients outside of SNFs would try to also access the model’s add-on payments. Another speculated that home health providers would possibly over-deliver on hours of extender services to jump from a lower-paying category to a higher-paying one.

It’s important to note that Choose Home would be for Medicare beneficiaries who come onto home health services following a hospital stay. That’s currently a minority of home health patients, as most are referred to agencies from the community.

Aggregate FFS spending on post-acute care has remained stable since 2012, in part because of expanded enrollment in managed care under Medicare Advantage (MA). 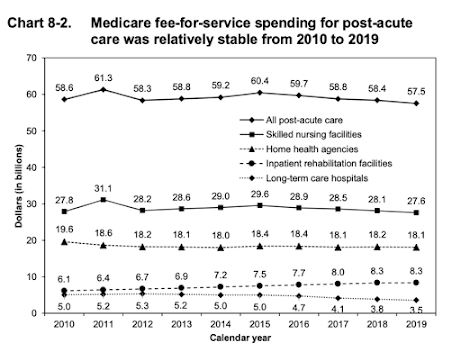 The Medicare Trustees and the Congressional Budget Office (CBO) project that overall spending for Medicare between 2019 and 2029 will grow at an average annual rate of 6.8%. Medicare spending will reach $1 trillion in 2022 under both sets of projections.

Most of that spending growth is due to America’s aging population, as the total number of people enrolled in the Medicare program is projected to increase from about 62 million in 2020 to about 78 million in 2030. That “silver tsunami” just makes Choose Home all the more important, Dombi said, noting that the legislation could create opportunities for SNF and home health operators alike.

“[SNFs] have the option to do this themselves, too,” Dombi said. “They could become an integrated provider service, as many of today’s skilled nursing facilities already have home care arm. I think this is an opportunity they really should be looking at seriously.”

This article was originally published on Home Health Care News on August 1, 2021.Written by: Robert Holly

Shop & Compare Health Plans Now while you still can!