Beyond the Furrows: Making healthcare accessible to local farmworkers 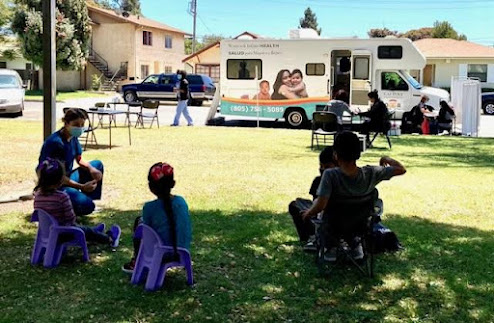 Santa Barbara County had just over 32,000 migratory and seasonal agricultural workers in 2017 — the most recent year for data — according to estimates from the National Center for Farmworker Health.

And the National Center for Farmworker Health lists four health centers as Migrant Health Centers in four Santa Barbara County locations: Guadalupe, Santa Maria, New Cuyama and Los Alamos. But not everyone can make it out to these locations to get the treatment they need, or even have the time to get there.

The Women and Infants Mobile Health, or WIMH, is attempting to address that barrier.

WIMH is a partnership of the Cal Poly Center for Health Research and the Noor Foundation, and it serves uninsured women and infants in Santa Maria and Guadalupe. Over 60 percent of patients seen are farmworkers, according to WIMH Mobile Health Unit coordinator Cristina Macedo.

“We are happy to be out there to provide — to break that barrier that we have with our population, especially farmworkers have, which is the access to medical services,” Macedo said. “So we are there to provide this access.”

Many of the Mobile Health Unit’s patients, Macedo said, felt they were not being taken care of by other health care providers. According to Macedo, one of the reasons for that is language barriers.

“It's super nice when they leave — the majority of our patients leave — that sometimes they just wanted to talk to someone that they just wanted to feel like somebody listened to their problems,” Macedo said. “They've gone — the ones that were able to go to a doctor — sometimes because of their language limitation or something, the doctor will just dismiss their problem.”

One of the obstacles, Torres said, to providing healthcare is communicating with the 12 percent of the Mobile Health Unit's patients who speak Mixtec, a language indigenous to the Mexican states of Oaxaca, Puebla and Guerrero.

“In my opinion, when you look at the data, that's a very big population that is being completely disregarded, because there's only a limited amount of Mixtec translators,” Torres said, adding that the Mobile Health Unit does get translation help from Herencia Indígena, an organization that helps with medical translations.

“However, I think that that is a big population, and just in general, when they go out to seek health care in, like, a facility that doesn't — doesn't even offer that,” Torres said.

Beyond language barriers, Torres said another hurdle to healthcare access for farmworkers is the fear of being deported, because many of their patients are undocumented immigrants.

“We do have to ask for their addresses most of the time. And sometimes they feel hesitant to give that out. So we won't write it down. But then — or we won't get their contact information,” Torres said. “But then it's also very difficult to follow up with them if they have to come back for more lab results, more tests.”

But schedules became a minor obstacle compared to a problem we all faced, starting in 2020: the arrival of the COVID-19 pandemic.

“With all the confusion and pandemic, we just stopped our services considering like, ‘Okay, maybe we shouldn't go out there to expose ourselves,’” Macedo said. According to Macedo, the Mobile Health Unit was not operating between March and October 2020.

“That was a huge barrier,” Torres said of the pandemic-caused closure. “And just like a huge loss, I think, in regards to being able to serve the community because we were just not able to, like, at all.”

Once the Mobile Health Unit returned, many farmworkers still had trouble getting there in person, or even finding out about it. That meant adapting patient outreach methods through technology such as WhatsApp.

But even WhatsApp outreach has its limitations — namely the cost for a data plan. Macedo said their alternative solution to that barrier is texting.

Although Women and Infants Mobile Health is making efforts to help farmworkers adapt to overcome some of the barriers they face, the Mobile Health Unit only serves women and infants in Santa Maria and Guadalupe. That’s just one segment of the farmworker community’s population in Santa Barbara County.

And because the larger population continues to face obstacles to healthcare — like language, physical access, technology and fear of deportation — there remains a need to expand services and increase accessibility to healthcare for farmworkers on the Central Coast.

This article was originally published on KCBX on July 19th, 2021.Co-written by: Francisco Martinez & Marisa Waddell